This text was researched by Emma Holohan and is read by Maggie Welland.

The self-portrait of John Lavery in Rothe House was painted in 1909. In 1908 John had been invited by the Uffizzi Gallery in Florence to submit a self-portrait to be displayed among the masters in their collection. This invitation was an acknowledgement of John’s work and in his autobiography he writes about it, “Naturally I was anxious to hand down to posterity all my good qualities, and so I took two years over it, scrapping one attempt after another.” The portrait in our gallery is one such attempt. The lack of detail in the drapery suggests it was a rough sketch originally and the way he portrays himself as a serious, but unexceptional man is indicative of an early draft. Eventually he sent a portrait to the Gallery but his friends complained that he made himself too ordinary, and so, he created another version of himself – not as John Lavery the man, but as John Lavery the artist. While the painting in Rothe House is not the style he settled for in the end, the fact that he kept this painting and passed it on to his family shows that this was perhaps how he truly saw himself.

In our gallery, the portrait of Hazel Lavery – The Red Book, hangs beside her devoted husband. It was painted in 1923 and exhibited for a time in Scotland where it received much praise, acclaimed as, “one of the most distinguished pictures Sir John Lavery has shown in Edinburgh for a considerable [time]…” Hazel is depicted lying in an armchair holding a book. She is dressed in a plain black dress, adorned with a brooch, a white beaded bracelet and a gold ring. Her red hair blends into the crimson cushions, highlighting her pale face. This portrait was painted only year after the death of their dear friend Michael Collins, while Ireland, which they considered their homeland, was suffering through the death and destruction of the Civil War. Their sorrow and anxiety over these tragedies are clearly displayed in the image, as Hazel appears to be in mourning. In fact, this painting was exhibited alongside the portrait of the deceased Michael Collins, Love of Ireland. While this painting was likely done as a study on colour, light, and tone, the personal tragedies of the Laverys shines through.

On John’s other side in our gallery, is his beloved stepdaughter Alice. This portrait of Alice as a child was painted by John’s close friend and colleague Harrington Mann, a well-renowned American artist. Mann painted the whole Lavery family, but John described him as a master painter of children. The portrait is undated but was certainly painted during Alice’s first years in London as a child around 1910. Alice would later grow up and move to Kilkenny in her 20’s, where she spent the next couple of decades with her first husband, raising her children. Kilkenny is also where Alice and the world said goodbye to John Lavery, a loving father and husband, and a man who created many famous works of art while fighting for Irish Independence. We are honoured to be able to preserve the memory of the Lavery family here in Rothe House.

Rothe House contains many significant historical objects, but one particularly notable exhibit is that of the Lavery paintings. These three paintings reside in our Cronin room. They are a small part of the legacy of the famed Sir John Lavery. John was a portrait painter of international renown, painting portraits of many famous figures from his time, including Queen Victoria, Winston Churchill, George Bernard Shaw, Princess Alex of Hesse – the last Tsarina of Russia, Shirley Temple, Eamon DeValera, and Michael Collins.

He was born in a poor Catholic family in Belfast in 1856. He was orphaned very young and spent an unhappy youth moving between the homes of relatives in Ireland and Scotland. He eventually set out on his own and made use of his artistic skills to emerge from poverty. He worked and studied in Glasgow, London, and Paris where he formed close relationships with many other prominent artists of his time, such as James Abbott McNeill Whistler. He managed to secure a commission to paint Queen Victoria’s state visit to the Glasgow International Exhibition. This launched his career as a society painter.

However, his rise to fame was not without hardships. He married the flower seller Kathleen Mac Dermott in 1889 and they had a daughter together – Eileen. Unfortunately, Kathleen died shortly afterwards of TB. In the wake of this tragedy, John completed a commemorative work in honour of his late wife and embarked on a European Tour with his friends from the artistic community. He exhibited his work all over the world during this time – in Spain, Italy, Morocco, and Chicago.

While abroad, John met Hazel Martyn, a young Irish American widow, who was famous for her beauty and poise. Hazel became his muse, and she was depicted in more than 400 of his paintings throughout her life. In 1909 John and Hazel were married and he returned to the UK with his new wife and stepdaughter, Alice Trudeau.

When he returned the UK was preparing for WW1 and John was appointed as an official war artist. Unluckily – or perhaps very luckily – John was prevented from travelling to the Western Front to fulfil his duties, by his ill health and a car crash during a bombing raid. Instead, he painted scenes of boats, planes, and airships. After the war he was knighted and continued his successful painting career. Meanwhile, Hazel became a central figure in London society, and the Lavery’s gained a wide circle of influential friends, including their neighbour Winston Churchill whom Hazel purportedly taught how to paint to relieve stress.

However, John couldn’t escape the horrors of war that easily. Among the guests in their home were Irish republicans involved in the prolific Irish theatre scene in London, including Michael Collins. The Lavery couple became interested in Ireland, John himself being an Irish Catholic, and Hazel being of Irish descent. John began his “Irish Collection” of portraits, and they stayed with friends in Ireland in 1913. After the events of the 1916 Easter Rising and the subsequent executions, the Laverys were shocked, and pledged their support for the rebels. John painted the trial of Sir Roger Casement, a rebel leader, and received much criticism. During the War of Independence, Hazel visited the British Prime Minister Lloyd George to plead the Irish cause, and having been unsuccessful, she wrote to Churchill claiming the only solution left was Irish Independence. After visiting Ireland during 1921 and witnessing the height of the conflict, John received death threats from both sides.

When a truce was agreed that year, the Laverys offered their London home as “a neutral ground where both sides might meet”. The Irish rebels met with British government officials many times in the Lavery home for unofficial peace talks at night, after the official discussions during the day. During this time, John painted many of the Irish leaders including DeValera, Griffith and Michael Collins. They continued to facilitate such meetings even after the establishment of the Free State Government.

The Laverys returned to Ireland at the beginning of the Civil War in 1922 and spent much time with Michael Collins. They witnessed multiple attempts on his life, and when he was killed, they were inconsolable. John painted a portrait of Michael Collins’ body covered by an Irish flag, titled ‘Love of Ireland’. After this, John continued to paint portraits of figures on all sides of the conflict. 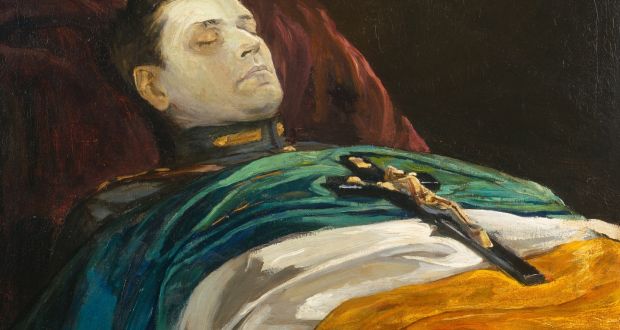 He was offered the position of the first Governor General of the Irish Free State, which he rejected, being purely an artist at heart. John was then charged with designing the new Irish banknotes. He of course, used his muse for this design, and Hazel’s image as the allegorical Ireland, adorned Irish banknotes for the next fifty years. John then became a freeman of both Belfast and Dublin.

In 1935 Hazel passed away, followed shortly by John’s eldest daughter Eileen. He was devastated. Meanwhile WWII was ravaging London and in 1940 John wrote to Alice, who was living in Rossanarra House in Kilkenny with her family, “London is no place for the old or the young, we are only in the way, will you take me until it is over?” He moved to Kilkenny and spent his final years with his daughter and grandchildren, painting, and writing his autobiography “Life of a Painter”. He died in 1941.

In 1986, Alice, a lifelong member of the Kilkenny Archaeological Society, donated 3 portraits to the society, wanting them displayed in Rothe House as ‘a memorial to her much loved stepfather’. Among these paintings are a self-portrait of John Lavery, a portrait of Hazel Lavery titled The Red Book, and a portrait of Alice by the American artist Harrington Mann.